Studies say even dogs can be suffered from food-generated diseases. And almost all of these diseases occur when they eat something that isn’t really good for them. Most dogs have been known to eat a variety of foods that their human companions also prefer to eat.

All human foods aren’t really good for dogs. When we don’t have much knowledge about the food that we’re sharing with our pets, it’s regarded as risky food. However, your canine may enjoy a ham hock with other table scraps, but are you sure about “can dogs eat ham hocks?”

There is some debate about this issue, but most experts say that ham hocks are not a healthy food for dogs. You may hear many misinformation about what dogs can and cannot eat. Whereas experts believe that ham hocks are off-limits to dogs, others swear by giving their canine friends this flavorful treat.

To get detailed information, take some time and have a look at the article.

Ham hocks are a popular cut of pork that is often used in southern cooking. They’re also known as a pork knuckles which is the part of a pig’s foot where the tibia or fibula meets the metatarsal bone. Actually, it’s the foot portion that is not the right leg, ankle, or foot (trotter) but rather the outer edge of the foot bone’s shank.

Since ham hocks usually contain a lot of skin, tendons, and ligaments, it takes long cooking by stewing or bracing to make it delicious. They are typically cooked by simmering in water or other liquid for several hours. And this cooking method helps to tenderize the meat and extract some of the flavors from the bone.

Ham hocks can be cooked with chopped greens, vegetables, or sauces with flavor. Usually, it is frequently added to soups before serving. Similar to hog jowls, it gives various meals a unique flavor. Usually, they have a high food value, with a total caloric count of 2067, 155g of fat, and 177g of protein for one kilogram. They also contain a total carbohydrate content of 1g.

Why do you want to feed ham hock to your dog?

You might wish to give ham hock to your carnivores for a few different reasons. First, ham hock is a fantastic source of protein. Dogs need protein to help them build and maintain muscle mass. Second, it’s a good source of fat. When you have an underweighted dog, you may try ham hock. Besides, some dog owners like ham hocks to offer as a treat because maximum dogs like its taste and become greedy whenever they see the menu.

The benefits of feeding ham hocks to dogs?

There are too many adversities while your dog eats ham hock. However, it doesn’t mean that dogs can’t eat ham hocks. If you’re like others, you presumably may not consider ham hocks part of the dog food category.

In reality, ham hocks can be eaten by both small and large dogs with no adverse effects. But only boiled ham hock is perfect for dogs without any kind of seasonings or species. Therefore, avoid raw ham hock though your dogs have a taste for it.

Ham hocks are well known for high protein, fat, and calories. They also contain some important minerals. Whereas we know dogs need protein-riched food. Protein is essential for dogs for many reasons. It’s an important energy source for dogs and helps them maintain a healthy weight. Besides, it’s a key building block for muscles, organs, and enzymes. Also, balanced development and growth it is essential.

After that, an essential part of a dog’s diet is fat which helps keep their coat healthy and shiny. Vitamins and minerals are also essential for a dog’s overall health condition. Phosphorus, potassium, and magnesium are those important minerals for dogs. Phosphorus is essential for cellular function and energy production. Potassium is important for muscle function and heart health. Magnesium is important for maintaining healthy bones and is involved in numerous metabolic processes in the body. 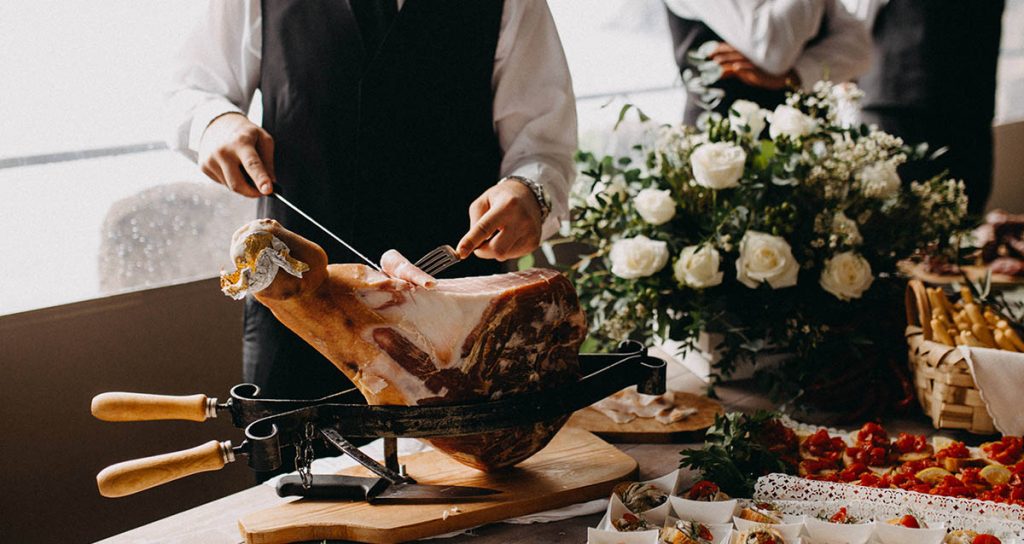 While ham hocks are not necessarily bad for dogs, some potential risks are associated with feeding them to your pet. To decide whether dogs can eat ham hocks safely or not, you should know about the negative aspects. Here are some harmful sides of ham hock:

Saturated fat is bad for dogs because it can lead to obesity and other health problems. This type of fat is found in meats such as pork, beef, and lamb. When a dog eats food that is high in saturated fat, the fat is absorbed into the bloodstream. The fat then begins to deposit in the arteries, which can narrow them and cause blockages. In severe conditions, heart disease, stroke, as well as other health problems may occur.

Ham hock may be delicious to dogs, but it can cause weight gain in dogs. This is because ham hocks are high in fat and calories. Besides, they contain added salt, which can also contribute to weight gain.

There are several problems associated with being overweight. These include increased heart disease, diabetes, and joint problems. Additionally, being overweight can make dogs difficult to breathe and can lead to fatigue.

Sodium is an essential electrolyte for dogs, but an excess quantity of sodium can cause many health problems. When dogs consume too much sodium, they can become dehydrated, and their electrolyte levels can become imbalanced. Dehydration, kidney disease, and an electrolyte imbalance can result from this. Therefore, it is important to monitor your dog’s sodium intake and to consult with your veterinarian.

Processed with nitrates and other chemicals

Nitrates can cause anemia and methemoglobinemia, which can be fatal. It can also cause gastrointestinal upset and vomiting. Most ham hocks you purchase from the grocery store are processed with nitrates and other chemicals that can harm dogs if consumed in large quantities. It’s important to check the labels of any ham hock you purchase to make sure it does not contain these harmful chemicals.

Ham hocks are a tough cut of meat that can be difficult to cook. They are often used in soups and stews, as the long cooking time tenderizes the meat. It takes more than hours to cook. Dogs shouldn’t eat them if they are tough and chewy because of improper cooking.

The spices that are often added to ham hock make it toxic. These spices can include garlic, onion, and nutmeg. All of these can cause gastrointestinal upset and even potentially lead to anemia. So, if you’re planning on cooking ham hock for your dog, be sure to leave out any spices. Otherwise, you might end up doing more harm than good.

Bones in ham hocks can splinter

Bones in ham hocks can splinter, which is bad for dogs. If your dog swallows a bone fragment, it could puncture its digestive tract. This is a life-threatening condition that has to be treated by a veterinarian right away. If you’re feeding your dog ham hocks, be sure to remove the bones before giving them the treat.

So, while a little ham hock now and then probably won’t harm your dog, it’s best to avoid giving it to them on a regular basis. There are plenty of other, healthier foods that your dog can enjoy.

Purine is a compound that is found in many foods, including ham. It is broken down into uric acid, which can harm dogs. Uric acid can cause kidney stones and other health problems.

Raw ham bones can be dangerous for dogs. They may splinter and lead to internal traumas like choking. Additionally, raw ham bones may be contaminated with bacteria that can cause dog illness. If you choose to give your dog a raw ham bone, monitor them closely and take the bone away if they start to chew on it excessively.

Dogs can eat ham bones that have been cooked, but some risks are involved. Splintered cooked bones might be a choking or stomach hazard. If not cooked properly, they may also contain bacteria. It’s best to avoid giving your dog any bone, cooked or raw.

Summary: Should you feed Ham Hocks to your dog?

As a pet owner, you should give your dog the best possible diet to keep them healthy and fit. You can offer ham hock to your furry but remember it’s not recommended, and of course, it should be a treat. Therefore, all dogs aren’t the same. So, don’t try to do what your neighbors do with their dogs. Take a consultation when seeing any bad signs after eating any food. Have a good time!

You can watch the video:

Hi, This is Parvez Khan. I’m the owner and chief editor of The PetLiker. I have couple of dogs as well as a cat. I’m observing those pets so closely over the years. On this website, I prefer to share all the experiences I gathered with my pets. Here I also like to explore the information that is relevant to pets.

Also, I write reviews about pet food and offer the best advice for keeping your pet healthy and active.